(Continuing Anatomy of an Art Fair Display Part 1, which featured the main items involved in an art display setup. Now for a closer look into the nooks and crannies of the display!) 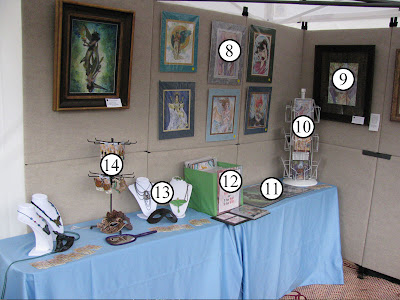 9. Curtain Hooks - I used curtain hooks to support my framed pieces. Be sure to get the ones with the super sharp ends! I was not happy to find the first batch of hooks I bought were the blunted kind, which equaled much cursing and trying to stab a carpet with a blunt object and failing. ($2 a pack at Lowe's)

10. Rotating Counter Rack - Great for the display of small prints or greeting cards and you can put a little sign on top. This particular rack has been with me for years now and has survived! ($35 at Displays2go)

11. Portfolios - I used an Itoya portfolio to display my large prints.  For the art cards, a simple trading card album worked well! ($5 - $11 at Hobby Lobby)

12. Print Bin - Actually a collapsible file box. Bottom comes out and it folds down, making it much easier to transport than my solid heavy print bin.  I'm thinking of replacing this with a much more rustic looking woven rectangular basket from Lowe's (which is advertised as 'closet storage baskets'). ($10 at Walmart)

13. Necklace Forms - I prefer the white ones as they show lint and dust less and my jewelry stands out against them. ($12 at Joanns, Hobby Lobby, and Michaels.)

14. 3 Tier Rotating Rack - These racks come with three levels of hooks which are great to display small items like bookmarks, keychains, earrings, and bracelets.  You can adjust the level of the tiers or remove them completely.  ($26 at Store Fixtures, USA) 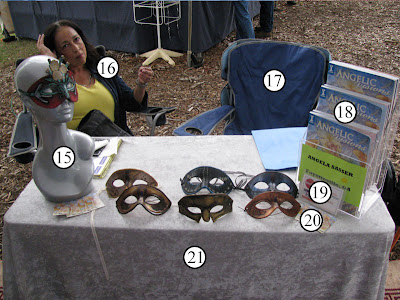 15. Mannequin Head - This head came with pierced ears, making it great for displaying jewelry in addition to masks!  ($26 at Store Fixtures, USA).

16. Minion (aka. Mom) - Art fairs are sooo much easier if you can trick someone into working for you in exchange for food!  That way you can actually use the bathroom without having to burden your neighbors with watching your stuff while you run as fast as you can across the street to the poddy and back.  Minions also make load in and load out 200 x easier. (Priceless! I love my mum.)

17. Director's Chairs - My family was already using these to stake out sporting events. They fold up for easy transport and are much more comfy than plain folding chairs.  The drink holder is handy as well if you don't want to put your cup on uneven ground or on your table with your art. I think we got these chairs at Sam's Club, but I am unsure.

19. Visa/Mastercard Sign - A simple plastic sign used to notify customers that I take credit and debit cards. I printed it off on cardstock and slipped it into the stand. You'd be amazed at how comforted people are to know that you can accept plastic money! Many people don't carry cash anymore, either because they prefer not to or because they're trying to limit their budget. Accepting cards is a good way to be that evil influence prompting people towards impulse purchases. That sounds bad, but hey, it's true! ($5 at Walmart or Staples)

20. Business Cards - Always ALWAYS have plenty of these on hand for customers (or for trading with your neighbors!) Networking is one of the biggest assets of actually venturing outside of your art cave and attending events!  I usually buy mine in 1k bulk packs from Vistaprint when they have special offers. They usually toss in a free pen or ink pad too, just watch that you don't click to confirm any subscriptions during their lengthy checkout!  I hear redtagprintsale.com has some nice prices on biz cards, but haven't tried them yet. (Roughly 10 cents per foil stamped card at Vistaprint.com)

21. Crushed Velvet Table  Cloth - This piece of material has been with me from the very beginning! It's actually just an oversized piece of crushed velvet I got at the store when it went on sale. I've used it as a backdrop when photographing crafts, as a backdrop for hung pieces, and also as a way to cover up my table when I leave and don't want people to be tempted by what's left underneath. (Approx. $3 a yard on sale at Joanns Fabrics)


And that's all for now!  I'm curious to see how my display will evolve over the next few events.
I'll be sure to let everyone know once it has leveled up!

So now for something completely different!  With the art fair season nearing and so many folks expressing their thanks for the usefulness of the Evolution of an Artist Alley Table posts, I thought it high time to post my art fair diagrams!

Mind, that this display is my very first setup and will probably change down the road as I learn, improve, and add things. Let this journal act as a record of where I began and hopefully as a tool for others looking into selling at fairs!

You might recognize some of these items and descriptions from the Artist Alley diagrams because I totally believe in re-using things where possible.


1. EZ Up Tent - This tent is a great first tent for those who don't want to spend the $1k that most of the Craft Huts cost!  It can be set up by one person, is white (as per most art fair requirements), and fairly easy to transport in its included roller bag.  Here is a video on how to set it up with one person (because I didn't find the included instructions very helpful).  Be warned, however, as this tent is light and is known for blowing away and wreaking havoc!  I snagged some velcro weight bags which you can fill with sand or gravel and that strap to the poles so people won't trip over them. ($200 at Sam's Club)

2. Retractable Vertical Banner - A pricey item, to be sure, but the fact I don't have to carry around a big pvc pipe set nor have it taking up space in my car makes this item well worth it! This vinyl banner pulls out from and retracts back into a spring loaded base that is about as big as a tabletop easel and very lightweight. I've lashed it to the tent pole using velcro straps so it wouldn't blow away. Mine was printed by my brother's sign shop. ($300 at Graphic Signs Atlanta for stand with metal base. $100 for cheaper version at Staples)

3. Propanels - After much debate over whether to get carpet panels, roll up mesh panels (which are about half the price), or to jerry-rig my own from something, I decided to go all-out with Propanels. Mesh panels, while collapsible and therefore more transportable, were still about $1k after all was said and done.  I also can't use mesh panels without the support of the tent's rafters, whereas Propanels can stand on their own, making them useful for any cons or shows I do without a tent. The 'knock down' variety of panels pictured here can be split in half and transported far more easily than the full panels, even if I'm still having trouble fitting them in my teeny hatchback. ($2k from Propanels.com for the Booth A setup with Knock Down Panels plus required hardware. I owe my family favors for the rest of my life for this one. Ouch.)

4. Tables with Table Cloths - The two small display tables on the left of the picture are actually tail gating tables bought from Big Lots for cheap which fold up and have an easy carrying handle. They were super light, however, so I had to weight them down with objects on top. The table cloths were just scrap bits of material thrown on last minute, I admit. The larger table on the right is a white plastic table bought from Sam's Club that folds up and can also be carried. It is a bit heavier than the tail gate tables and doesn't really need to be weighted down. ($20 - $30 at Big Lots and Sam's Club.)

5. Easel with Signage - The stand up easel was purchased at Joanns Fabrics and is just a simple cheap wooden one without any bells and whistles. The sign was printed on foam core by my publisher and was eventually replaced in this setup with a piece of framed art instead. I'm fairly sure you can get foam core signs like this at Kinkos or other printing places. ($10 at Joann's Fabrics)

6. Folding Canvas Print Bin - This is the medium sized print bin available from Dickblick.  Prints ranging from 11x14 in. to 18x24 in. look best in it.  I noticed most people would stop and flip through it rather than venture into the tent. Note to self - MOAR flip through bins for people! Folks looove to browse through them for some reason. Folds up for easy transport. ($25 at Dickblick.com)

Stuff I forgot to include -  The Carpet - I like the idea of a carpet in a tent. It feels so much more cozy, as if you're walking into a little shop!  It also made the ground a little more even for customers to walk on.  We also used it to lay items on while we were setting up so they wouldn't get muddy.  My family picked this up in a flea market in Saudi Arabia years ago so I have no idea how much it costs.

This entry is going a bit long, so I'll be breaking up this grand monologue on art fair display into parts.

Stay tuned for a closer look at the particular display items nestled within the tent next time!