Review: Avatar: The Last Airbender (The Art of the Animated Series) 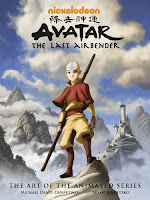 It's no secret that I think the animated series Avatar: the Last Airbender is one of the most epic and amazing animated series of all time, so it's safe to say that I'm a bit biased in this review.  I picked this book up as a concept art study tool, but it's so much more than that.

This book is a record of the passion of the team behind it, an homage to all of the hard-working artists, animators, and creators.  It's not just a compilation of pretty pictures, but also features a fair amount of commentary from the creators about what inspired the series, a glimpse into the production schedule, as well as a sobering view of what hard work it is to be in animation and the challenges they met (and surmounted) along the way.

For starters, this book is oversized allowing for as many character models, expressions, and commentary as possible to be crammed in.  It was fascinating to see how characters looked in their early phases of development for the pilot of the show and just how many iterations went into getting character and setting looking just right.  Artists had to tone down detailed designs so that they would fit into a production budget.  This a great example of what I might have to work with on a project, since budget and art are such a hazy thing without solid examples of what you might have to cut from your designs to work in game/movie/animation/etc. production.


The book covers all major locales of the show, what inspired the costume designs of each region, and the particular challenges and decisions that went into settling on the designs.  Each area the characters visited had to have it's own unique national identity to it, which is golden information for any student to study, not just animation students.

One aspect of the book I particularly enjoyed about the presentation of the characters was the cross-section breakdown of their various scabbards, straps, and weapons so that we can see how they interact with the clothing of the character and how they might function.  This gave me some great ideas of how I can clearly present similar ideas in my own designs.  There are even several storyboards from several pivotal moments included in the book, which was fascinating to me to see for the structure of the boards and what notes were included on camera angle, dialogue, etc. in the margins (yet another skill I'd like to expand upon).

In addition, we get to see some fun doodles from the staffing artists that kept them sane during the production, which emphasizes the fact that no matter how masterful something is, there are real human beings who worked hard to get to their level of skill level behind each successful project that you see.  I enjoyed this section the most because it gives me hope that, yes, even beginners can get there with a strong team behind them and the right amount of study!

Along those same lines, there are tons of photos of the various locales (China, Korea, Japan, etc) the team traveled to get inspiration for the show, emphasizing that more often than not, good design does not just emerge from thin air, but from taking real world references and morphing them into something grounded, but unique.

There's so much more in this book that I can't cover here, so I'll just end with this.  If you like the show, or just want a great reference book on design layout, environments, and colorful characters, this book is for you!

Video from Parka's review of the book.

Like my reviews and want to help fund my book habit?
Shop for this book via my Amazon referral link!
Posted by Angela R. Sasser at 7:56 AM 1 comment: