Cross-posted from my Patreon blog and re-shared here for your convenience!

I wrote a rather extensive post on Facebook back in 2018 about my experience with my Birthstone Goddesses coloring book Kickstarter as an artist with a small following. I am finally re-posting it here so it is more accessible to all! (This project was known as the Ladies of the Months back then. Ah, title regrets!)
Book Kickstarters are a LOT of work and this post summarizes the life cycle of how this campaign operated with bonus pointers at the end as to why my first Kickstarter for the Birthstone Goddesses failed. You'll also find a compilation of links to my ads, landing pages, etc. at the end for further study.
May this prove useful for any of you hoping to run your own Kickstarters in the future!  SHOUT OUT to the Make Your Art Work folks whose Kick Start Art Intensive with Stephanie Law prepared me for the Kickstarter journey that helped me make this campaign a success! 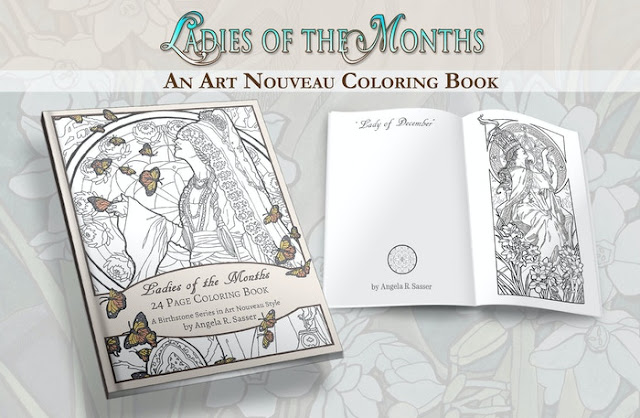 WHAT WORKED FOR ME:

- A Hype Period.
I was promoting my Kickstarter 2 months in advance via Facebook ads and Facebook coloring book groups. This feels especially important when you have a high funding goal, but a smaller audience, as you'll need all the eyes on your project that you can muster in order to be funded, which may take longer than the actual campaign time, itself. In this case, a longer lead up time helps tremendously! It also gives blogs and curators time to respond to your requests for sharing your project and for them to schedule ahead.
- An Incentivized Landing Page.
This Landing Page created with Mailchimp acted as my central hub for information for all my ads and links.  I decided on this because I could include a mailing list sign up which is good for gathering new fans for future promotions, as well as quick facts about my Kickstarter and my product.
When they signed up via this page, they would be sent a Welcome message via Mailchimp's Automation workflow customized for them with a free coloring page which was a sample of a page from the book to tease the final product.
This landing page also included a note saying that people could Follow me on Kickstarter if they were already members and I got a large amount of Followers from it who backed the project and are now keeping tabs via their internal Follow system for my future projects.
- Sharing to Interest Groups.
I shared my project on Facebook and Facebook Pages/Groups dedicated to Art Nouveau and coloring books, but also shared the sample page and other art from the series on subReddits that were interested in the style of art I was working in (ie. Art Nouveau and Mucha blogs/subreddits). Any users who visited my website were also funneled to the Kickstarter via banners advertising my Kickstarter.
I also contacted a coloring book magazine client I'd worked with in the past and they re-shared my KS to their fanbase. They were excited to share the success of one of their artists. Sometimes past clients can be some of our best cheerleaders!
- FB Event 2 weeks Before the Launch.
I feel like hosting this event where I talked about the art and gave away color pencils and other items related to my topic helped keep the project on the radar immediately before people were to take action. It also helped people get excited right along with me for a more personal connection!
- Share New Art in Video Form.
Having new art/videos related to my project being posted regularly during the campaign.  I posted time lapses of my inking from the series as well as quick short time lapses of originals I made for Rewards and held back specifically to share during the month of my KS.
IE. one day I'd share the 2D art, the next day I'd share a time lapse of that same art. This kept my art and KS on the radar and didn't feel too spammy since I was sharing different aspects of the art each time and new art people were really excited to see. People could enjoy the flat 2D posts for the image, then the videos gave them another layer of dimension to appreciate the making of the piece.
- Pay for Extremely Targeted Ads.
Not only did I pay for ads during the hype period, but I boosted art posts that were related to my Kickstarter. IE. posting new originals that were attached to Rewards tiers and funneling people to the project that way.
I also paid for an ongoing daily limit ad of a slideshow that showed off features of my book and funneled people to the campaign page to a very specific targeted audience narrowed via interests related to my project (ie. Art Nouveau, coloring books, Kickstarter, people with upcoming birthdays or friends with upcoming birthdays, etc.).
I feel targeting ads this way was -essential- for reaching beyond my somewhat small audience as even after the hype period, I only had 250 people on my mailing list!
During the final week/78 hours of my campaign, I changed these ads to be more urgent with a 'FINAL HOURS' tag and also did two ads, one ad to targeted to the previously mentioned custom targeted audience and another post boosted directly to my FB Page fans to alert any stragglers who were already my fans who might have forgotten to pledge.
All in all, I spent around $200 on ads for my pre-hype and campaign period and my stats showed that Tumblr, Facebook, and my mailing list were my biggest funnels for pledges.
- Send Email Reminders.
In addition to having a Landing Page to capture sign ups, I also did 3 emails:

1. A project launch email
2. A mid-month reminder showing off the Rewards they were missing out on
3.  A final 72 hour email.
- Press Kit Posted on Patreon.
My Patreon Patrons are some of my biggest, loudest fans, so I chose to host a Press Kit in a blog post there which had links to posts people could re-share, images they could save and re-share, and other project info. They were some of the first people to pledge AND constantly shared my KS throughout the month.
- Extremely Motivational Stretch Goals.
My Stretch Goals were tied to something people would really enjoy, but that I wouldn't be too stressed if they were not met - extra pages for my book of supplementary art. The folks who wanted these pages shared the heck out of the project as much as they could because they saw pages they wanted to be included and wanted to motivate others so they could be met.
- Include 'Ways to Help' in Your Kickstarter Updates.
Every single Update I did during the campaign included a list of links to post I had created with the intent of being shared.  That way people don't have to do much more work than to click the link and re-share on their chosen platform.

- An Uptick in Fan Following and New Patrons.
I had so many new Patreon Patrons sign up during this campaign, as well as an uptick in orders. I was not expecting this! Apparently, new fans with money who found me from shopping around on KS went to my Patreon thanks to the Press Kit link I would periodically put in my KS Updates as an easy way for people wanting this project to succeed to share it.
- Early Pledges Earned the Project We Love Tag.
Because I was able to get so many people pledging at the beginning ($2k in the first couple of days), I got a nice bump very early on and earned the coveted Project We Love tag after the project got on the Popular list in the Publishing category.

WHY I FAILED BEFORE?

I wanted to talk about this because I learned a lot from my first ever Kickstarter which failed.  I was trying to raise money for a print run of my first birthstone Lady with the intent of having a Kickstarter for each one in the series.  Here are the reasons why I think it failed:
- No Hype.
I just hit the button without telling anyone much of anything and relied solely on what boosting I could do during the campaign. Blogs who might've featured me ended up being too late to share by the time they got to my inquiries. People just didn't have enough time to hear about the project!
- No Landing Page.I feel like having that info page clearly detailing my product's features and asking for sign ups helped my coloring book so much! I didn't have much set up to entice people before, just videos introducing myself and what I was making, which was perhaps too long for people to watch to make a snap judgement.
- Too Niche.I was trying to do one print at a time to a much smaller audience. I barely had 100 people on my mailing list at the time, plus the fact that I was trying to push a print aimed at a single birth month that's statistically not a popular birth month. I've also done so much more networking since this first failed project and knowing more 'curators' who can share my content to their interested audiences has been invaluable!
- Misunderstandings About What I was Doing.I don't think people understood that by pledging for one print, they would help improve the next painting in the series. I eventually moved my project here to Patreon where people are used to supporting an ongoing project and this format has worked better for me!
--
I know that was a ton of info, so if you have any questions, feel free to comment with them here so that the answer in replies might help others!   Good luck and keep at it, fellow dream-makers!